Sigh, autumn.  The season where the District skips off to collectively squee over shorter days, desolate beaches, vests and inedible corn, while its best friend summer is left to bleed out in a heap on the sidewalk.  IronCitySpy and I have spent countless hours trying to convince you people of the obviously superior season, a position that has only been reinforced by TV, music, movies, books, branding and overall number of smiles, but, in an attempt to turn over a new (dying) leaf, we decided to throw on some Tartan, sigh heavily, and help you watch some plants give up:

Option 1.  The best place in DC to take a million tree selfies without judgment and then watch Westworld The National Arboretum.  Hands down.  It is free, massive, and you can find plenty of places to practice your selfie in peace while still getting home for HBO Sunday.  You also can get pictures of autumn splendor reflected in other flora that thrive on the precipice of death, like certain  vines, shrubs, flowers, and autumn bonsai, which are ADORABLE.  The Arboretum does not have a restaurant, but it does sell snacks.  You could also pack a picnic and force everyone to eat on the freezing ground, because that seems like something that you people would do.

Other options include Rock Creek Park, C&O Canal Historic Park, Roosevelt Island, Arlington Cemetery (though perhaps not the best selfie spot) and yes, even the National Mall.  DC is actually a green city, unlike other cities who claim to be (*cough* New York) so just explore it.

Option 2. By “tree viewing,” I meant eating pumpkin pie in a large sweater.  Where can I do that, but surrounded by above-average dying trees?

An admittedly noble request.  The knee jerk response on most websites would be Harper’s Ferry, and honestly with good reason – great overlook hike, quaint restaurants, and a multitude of hiking options.  Yahoo rated it best foliage or something.  The problem with Harper’s Ferry is the CROWDS.  It is a zoo during peak leaf season, and it is tough to find anywhere to park or eat.  So go if you want, but, as an alternative, let me humbly recommend Frederick, Maryland.

Not only is that an old-timey locomotive, it is a MURDER MYSTERY DINNER LOCOMOTIVE. I am serious. Click the picture and search for “murder mystery dinner train”

I mean look at that.  It really has all your Fall things:  old buildings, Americana restaurants, covered bridges tours, three breweries in the city, one of which is named after Monocacy, a civil war battlefield that you can tour nearby if that’s your thing.  New Market, Maryland’s antiques capital, is a 15 minute drive away,  and, if you prefer eating your pumpkin pie in active wear, you can first hike in either Cunningham Falls State Park or Catoctin Mountain Park  25 minutes north of Frederick to really get the Thelma and Louise tree experience. 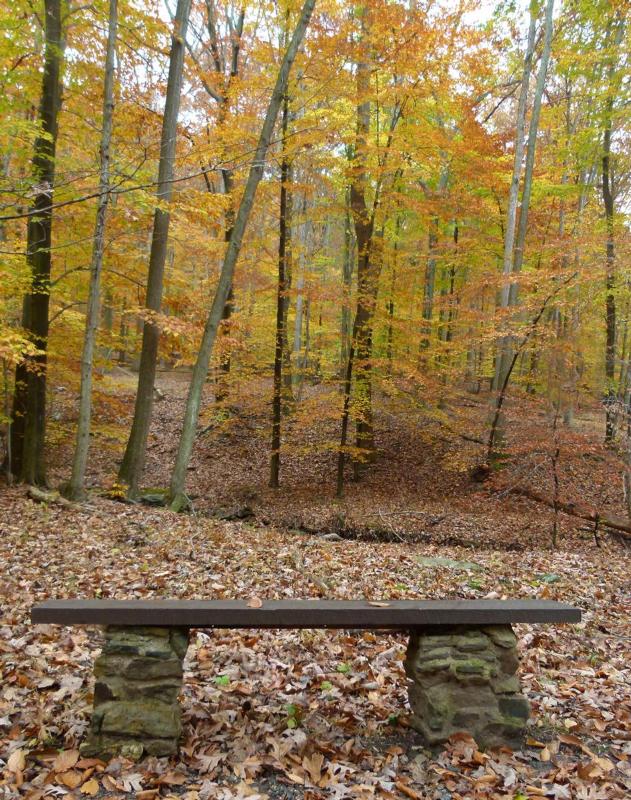 I know, its almost too seasonal.  I’ll give you a minute.

Option 3. I can only tolerate tree viewing if I am constantly moving, like a shark.  I also have a dog. 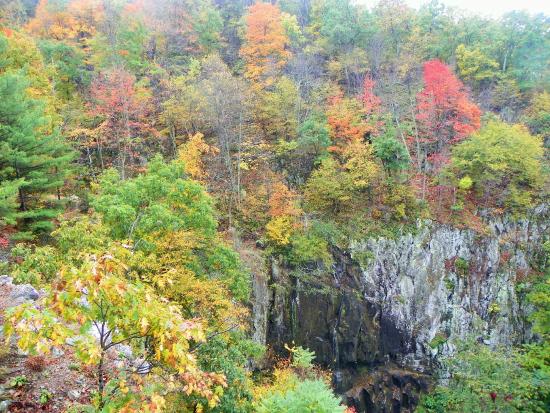 Another respectable request.  It will probably be freezing and dogs are pretty great.  For hiking, we are really spoiled for choice in the DC area, so I am going to highlight three trails that are good, dog friendly (on leashes) and maybe not as obvious as Old Rag and Great Falls:

Option 4.  I am willing to go wherever, but am anxiety ridden over figuring out when “peak foliage” is.  Do you know when peak foliage is?  Does anyone? I heard our summer pushed it back? Is that true? Did I miss it?!?!?

First, no, you haven’t missed it. Plenty of places have not peaked yet.  However, from one psychopath to another, it is impossible to predict peak foliage within a neurotically-acceptable margin of error.  Yes, you can find a foliage map here, but as I have intimated above, it comes with caveats that are frankly unacceptable those that spend all their vacations agonizing over whether everyone is actually having fun or just faking it.  Thankfully, I have discovered a solution:  WEBCAMS.  Many awesome places have webcams that update in real-time or daily, so you can see if the foliage actually looks good. You can also see whether you have missed it, since peak season is very regional.  Here are some good ones:

So that’s that.  I hope the death of flora is sufficiently bloody for you people.