And no, there is no fire. No delightful. I am currently at school for my first day of courses. We did not get a 2-hour delay so I slid into class at 9am, literally slid, because the ice is RIDICULOUS outside. Ironcityspy wore his converse shoes like an idiot, so hopefully he planned his walk to work carefully. An injured co-SPY is of little use to ispythingsdc.

Anyways, the ice and ice-snow have also motivated a public service announcement. Granted, I am not confident in the effectiveness of such SPY alerts. The SPY alert on discarded Christmas trees simply prompted DC to take all the trees and pile them into massive tree pyramids also on the side of the street, reminiscent of the massive snow piles after snowpocalypse, or perhaps more aptly, bodies after a holocaust. The sad, decaying remains of a holiday season. 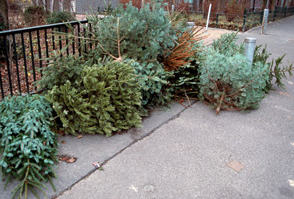 The beginnings of a tree pile

Anyways, in the spirit of public service, I did want to announce that HANS IS MISSING!!! I know. It’s terrible. Who is Hans, you ask? Well he is the twin brother of FRANZ:

A nutcracker family is broken! Yes, nutcracker twin Hans at Trio Diner on 17th Street went missing on New Years Eve. I suspect it was the rat king. Or a bunch of drunk idiots that thought it would be awesome to bring a massive nutcracker to their party. Either way, Franz has written this heartfelt note:

Poor guy. It is tough enough that Christmas is over and he has been relegated to a superficial window decoration rather than an actual instrument to crack nuts. Now his Christmas friend is gone. Could you imagine going back to storage without a friend?

So, if you happen to come upon a life sized nutcracker, begging for change in the streets, at a soup kitchen, or held in virtual house arrest by his captor, contact Trio at ContactUs@TrioDC.com or 202-232-6305. They miss Hans.