How do I know you haven’t been there? Because it’s in the Palisades. Where is the Palisades? Um. Nobody knows. As far as I can tell, the Palisades is a DC neighborhood that occupies that amorphous space between the Foxhall Road Entrance to Georgetown University to the DC Reservoir. However, I have no idea what the exact borders are, nor do I know whether buses run its labyrinthine streets. All I can say is if you pass the German Embassy on the road to Kotobuki, you are on the right track.

The Road to Kotobuki

And the journey will be worth it. Trust. I am a native Californian, and Kotobuki reminds me of our little sushi houses out west. It is tiny, with only a small sushi bar, about 9 tables, (get there early!), and minimal decoration. Ironcityspy and I have been countless times and each time they are playing Beatles music in the background. It’s also always early Beatles, 1963-65ish, which is the perfect time period for happy, soft background noise. 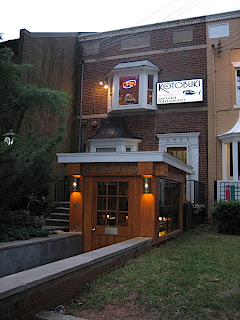 And the sushi. The sushi is cheap, fresh and good. There is no “Rollin’ in the District” with crab, Old Bay soy reduction and crushed potato chips (or whatever designer rolls are these days), but just standard fare done right. They have all the expected offerings as well as a few interesting fish choices thrown in, such as sea scallop and fatty tuna, both of which aren’t easy to find. Nigiri sushi starts at $1.25 a piece and the standard 6-piece rolls, eel, yellowtail, salmon avocado, spicy tuna et al, are $3.95-$4.95. The fancier ones will run you a bit more, an $8.95 rainbow roll at the most, but I mean COME ON. Those prices are amazing! And it is good. It really is.

Yelper’s Norry H. and Frank H. photograph better than I ever could

If you don’t like sushi, they have shumai and other appetizers, as well as  kamameshi and unadon sets, which have gotten great reviews. They also have additional offerings in Japanese that I do not recognize, which I obviously take as a sign of authenticity.

So how did Palisades manage such an awesomely random little haunt? Well, it turns out it’s not that random after all. Kotobuki is owned by the same people that run Makoto, the restaurant below it. Makoto is very expensive and known to be one of the best, if not THE best, Japanese restaurant in DC. It has been in operation for close to 20 years with Japanese Embassy folks routinely taking their guests there. So yes, Makoto is the real deal and, unsurprisingly, so is their little Kotobuki stepsister.

So find a friend with a car and go. It will be worth it.

One thought on “Kotobuki: The best little sushi house you’ve never been to”