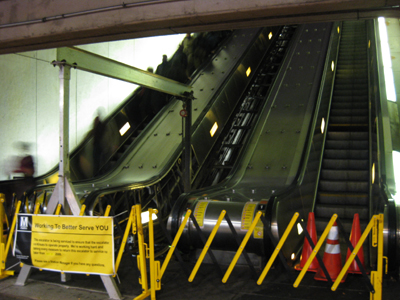 Convenience - brought to you by WMATA

So in my mind, I felt that DC metro has become a hotter topic of late. It seems like everyday the news reports that Metro escalators are slingshotting people, ipods are getting stolen, or politicians are trying to ignore the malfunctioning elephant in the room, which is easy to do since they don’t actually ride the metro. But then I wanted to proof. I wanted to see whether Metro was really that newsworthy, or I was just surrounded by people that constantly complain. After taking 30 minutes to search February headlines, the results are in. And, well, Jesus WMATA:

Feb 18 – Metro Grade: How dirty is Metro, and does it matter?

Mar 4 – Congress could cut Millions from Metro and MARC budgets

Yeah. So in one month Metro has succeeded to be broken, broke, dirty, dangerous and discriminatory (allegedly). It’s customers and employees both steal things. Republicans and Democrats, both local and national, are united in not wanting to give it more money. It’s broken escalators terrify old people, it’s new proposed service cuts terrify the young. I doubt corporate america will touch it. And, lest we forget, last November this happened:

The Los Angeles times reported on this accident last week. Yes beloved reader(s), WMATA dysfunction has gone Hollywood. I am not sure what will happen in the coming months, but from one SPY, in one google search, conducted in one hour, it doesn’t look good.

One thought on “Yikes: A month of DC metro headlines”