Point for DC! Yes, it turns out we Washingtonians are of a higher revolutionary fortitude than our hipster New York brethren. Why? Well despite the fact that antique bicycles don’t bode well on grassy battlefields, new research has shown that malarial mosquitoes located in the South and mid Atlantic regions played a significant role in the American defeat of the British. 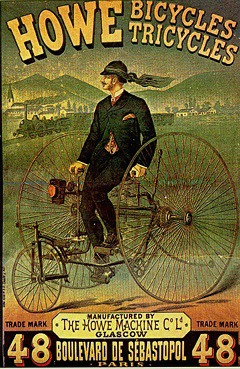 Yes. The DC humidity you constantly complain about helped America win her freedom. According to the Washington Post, the mosquito problem began when the British took on a “Southern Strategy” in 1779 to try to turn the war. However, the pasty Brits did not anticipate the veracity of A. quadrimaculatus, malarial mosquitoes. In the summer and fall of 1780,  the troops of British General  Charles Cornwallis suffered heavily from malaria, moving steadily up the coastline to try to avoid the “sickness.”  Unfortunately, they settled on mosquito-infested Yorktown, VA.  As stated by Lord Cornwallis,  his “force [was] daily diminished by sickness” to the point that they ultimately could not resist the Franco-American forces. The British surrender at Yorktown ended the Revolutionary War.

The Post goes on to say that malaria was “especially prevalent in the warm, humid coastlands from Georgia to Maryland.” You think? Go into my DC apartment “gym” in July. If mosquitoes still carried malaria, SPY would be would either be deader than dead or have acquired a superhero-like resistance to the things.

Off bug spray: enemy of freedom

And yes, the fact that “medicine” in 1780 was “magic medicine,” in the form of dead pigeons, swinging from a tree by your hair, or eating spider webs (see article), didn’t help. Nor did prayer (God zing!). However, the Americans never got malaria. Why? Because we DC residents know better. We avoided zones of mosquito death, while the Brits laughed at the silly little insects while politely succumbing to disease. You think New York hipsters would know better? Put a half renovated barn with a loft-space and herb garden in the middle of malarial Yorktown and see who dies first.

So DC residents, our humidity has made us a hardier race. Embrace it. New York and San Francisco would have fallen with the Brits. Go America!